In the Fall 2020 semester, Social Network Analysis for Computer Scientists is a hybrid on-site/online course.

Update 18-12-2020: Final grades have been submitted to the student administration.

Need help? Ask your questions during the lab sessions. If it is more urgent, walk by the lecturer or assistant's office. If they are not around, contact snacs@liacs.leidenuniv.nl.

The main goal of this lab session is to ensure that everything is set for making serious progress writing the course project paper in the coming weeks.

Course project paper
Earlier, you have made a project planning. One upcoming deadline is the first version of your paper for the peer review session (November 11).

As always: please ask course staff for help if you are still unsure about certain aspects of your project.

The main goal of this lab session is to get started with both the course project and with Assignment 2, and to get to know the data science lab.

Data Science Lab
The data science lab website provides necessary information and documentation. Become familiar with the lab and how to run code on it, and how to place data within the lab. This may be handy for Assignment 2 and/or the course project. Remember:

Course project
Below are some topics you can discuss and investigate together with your project team partner.

The main goal of this lab session is to become familiar with NetworkX (a Python package to analyze networks for research purposes).
All relevant information on NetworkX can be found in the NetworkX online documentation.
For this lab session, you need a working python environment. For this, there are two options:

Done? Proceed with Exercise 2 of Assignment 1.

Looking for a challenge? Check out these two alternatives (that you can also use instead of NetworkX throughout the course, if you prefer (but for which there is less help available)): 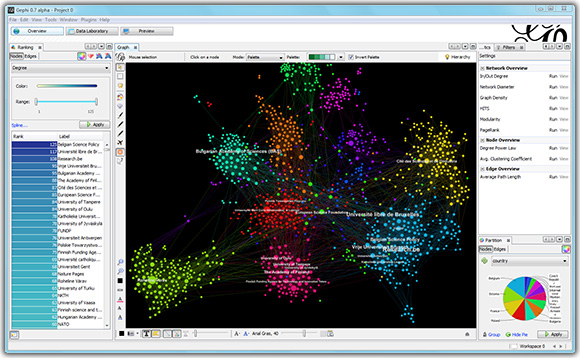 Learning goals. The main goal of this lab session is to become familiar with Gephi (experimental beta-software to visualize networks for research purposes) and its input format. At the end of this session you should be able to:

There is no deliverable for this lab session, but you are assumed to know the tool afterwards. Practice more afterwards at home if needed.

Instructions for today: Lab session on Gephi.
The following steps and tutorials will help you get to know Gephi.

Done? Get started with the practical part of Assignment 1. You can download the smaller datafiles medium.tsv and large.tsv. If you want to analyze huge.tsv, you will have to get it from the shared folder stated in the assignment.

Teams work on a course project for 60% of the course grade. The project is about a certain topic related to social network analysis, and the project consists of:

Instructions for the course project paper are available.

B. Online or on-site group


Note: scientific papers (ACM, Elsevier, etc.) can often only be opened from within the university domain (or from home via SSH/VPN/etc.). IEEE Explore papers can often be opened by looking them up via computer.org. Alternative links and preprints of papers can often be found through Google Scholar by searching for "Title of the paper". Contact course staff if you have tried all of these options and are still not able to access the paper (do not pay!).

Some students have expressed interest in additional reading material to help freshen up on skills and knowledge required for this course.

See the e-Studyguide for a more general description.